Art, in all of its various forms, has the ability to create emotional moments for the people viewing it. According to our textbook, “anything and everything could be admitted into the domain of art” (Sayre, 2013, p. 476). As we’ve discussed throughout this term, people bring their own experiences and beliefs into their interpretations of art. While art has the power to delight its audience, it also possesses another quality – the ability to create controversy. For those pieces that are considered controversial, they tend to shock and appall the viewer, and can be considered offensive. These pieces tend to challenge people’s political, moral, ethic, and religious beliefs, forcing them outside their comfort zone and creating disagreement and often censorship of the offending piece.

The first thing that came to mind when I read this week’s discussion instructions was a film, I had seen more than twenty years ago: Stanley Kubrick’s “A Clockwork Orange”. This is a 1971 file adaptation of Anthony Burgess’ novel of the same name. To summarize this film: it is set in the future time where crime has run rampant. The film largely focuses on the violent and psychopathic leader of a gang, Alex. This gang engages in what is known as “ultraviolence”: they assault, murder, steal, and rape without remorse. When Alex gets caught by the police, he is given the option to participate in what is ultimately a government experiment to reprogram his violent mind. This film is full of physical and sexual violence, as well as government conspiracy. Kubrick is quoted as having said that “Alex represents the id, the savage, repressed side of our nature with guiltlessly enjoys the pleasures of rape” (Robey, 2016). This statement is as shocking as the film itself. This film ran for two consecutive years and had phenomenal success at the box office. Accusations were made that the highly controversial file had inspired copycat rapes and murders. Kubrick himself, unable to bear the fact that his film had become a tool for evil, pulled the file from circulation in the U.K. (Robey, 2016). The film, while available to viewers in the United States, was not available in the UK for viewing for almost thirty years! 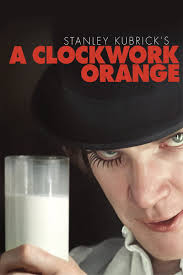 While this particular film depicts the evils of man, I do think it does make a social contribution. The film addresses the fundamental issues of human nature and the existence of good and evil. It also shines a light on the potential dangers of a government that imposes its control over a person’s free will in order to solve social problems.

Are governments ever justified in censoring art? That is a difficult question to answer. According to the American Civil Liberties Union, “a free society is based on the principle that each and every individual has the right to decide what art or entertainment he or she wants – or does not want – to receive or create” (American Civil Liberties Union [ACLU], 2019). People have the freedom to refrain from watching, looking, or listening at art that offends them. As a parent, I feel that is my job, not the government’s, to shield my own children from things that I do not want them to be exposed to. However, there are some areas where I believe that the government has just cause for being involved and that is in the case of obscenity and distribution of obscenity related to adults or minors, as well as laws against exposing minors to obscene materials.

This has been a really great and thought-provoking topic, and I look forward to reading all of your posts!

Have a great week!
Kim

American Civil Liberties Union. (2019). Freedom of expression in the arts and entertainment. Retrieved from https://www.aclu.org/other/freedom-expression-arts…

Robey, T. (2016, February 3). A Clockwork Orange, the look that shook the nation. The Telegraph. Retrieved from https://www.telegraph.co.uk/film/what-to-watch/a-c…


Do you need a similar assignment done for you from scratch? We have qualified writers to help you. We assure you an A+ quality paper that is free from plagiarism. Order now for an Amazing Discount!
Use Discount Code "Newclient" for a 15% Discount!